“When I returned to church, people told me they never thought I was going to make it out of the hospital. But there I was. Alive. Another miracle.”

“Come here, Rusty,” Robert says as he strokes his canine companion with strong calloused hands. A carpenter for 45 years, Robert՚s hands have seen decades of hard work at his craft with seven additional years in machine shops. In quieter moments, his hands cradle his beloved bible as he prays for others and for his own recovery from idiopathic pulmonary fibrosis (IPF), a life-threatening lung disease that causes progressive scarring of the lungs, making it increasingly difficult to breathe.

Robert and his wife, Brenda, make their home in the foothills of southern West Virginia, where neighborhoods are peppered with small, unassuming homes that have been tended to by families for generations. Evangelist Robert B. Dunlap, as he prefers to be called, was raised in this small town. He now lives just down the road from the house where he grew up and where he met Brenda at the age of 12, when she rode past his house on her bicycle. They grew up together, married, had a daughter, and became “pickers." They giggle at the term but are serious about their pursuit of finding treasures in flea markets and tag sales and reselling them for a profit. 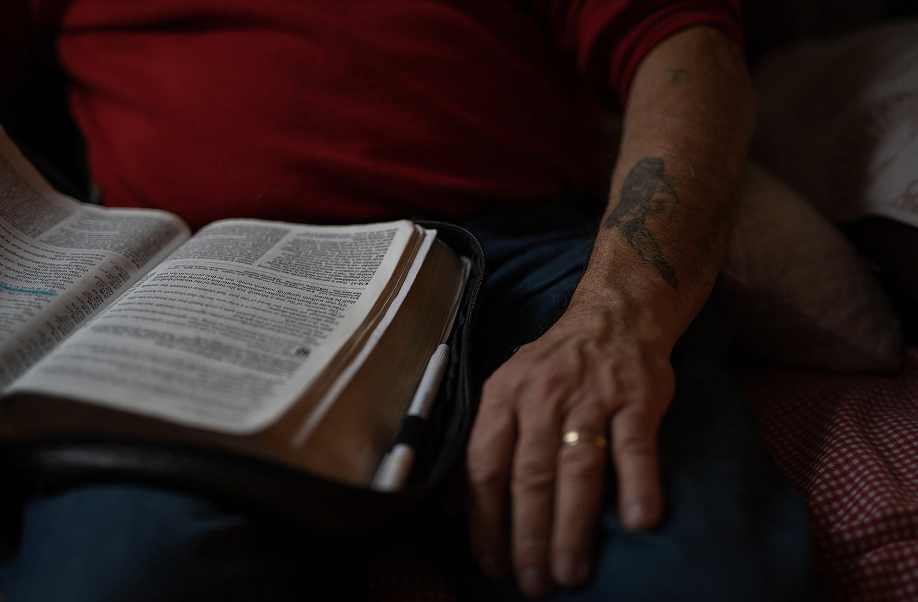 One evening in 2017, after a day of yard sale picking, Robert came down with what he believed was a simple cold. Brenda bought him a box of tissues and a package of cough drops. They thought nothing of it. “There was a virus going around and everybody that got it had an uncontrollable cough,” Robert says. “I got the cough too, and I had the same symptoms as everybody else.” While others՚ coughs resolved after a few weeks, Robert՚s persisted for months. He became lethargic. Some days he fell too short of breath to complete simple tasks like carrying wood. One evening, he woke up at 3:00 a.m. feeling more sluggish than ever. By morning, he forced himself to stand up, and through what felt like a cloud of heavy, thick fog, he staggered over to the trash can in the kitchen and vomited up blood. “I thought, What kind of a virus is this?”

Brenda insisted that he go to the hospital that evening. “He was so weak and frail,” Brenda says. “I could tell something was really wrong from the way his eyes were sunken in. I was terrified.” Brenda wrapped her arm around his shoulder, and together they walked through the automatic sliding glass doors of the ER. The triage nurse saw Robert՚s pale, bluish complexion, the way his head hung in exhaustion, and took him in immediately. Serendipitously, a lung specialist was in the ER that night. For Robert, the presence of the specialist felt like a divine intervention. “The lung doctor knew to look at my fingernails. I didn't understand why, but he saw that they were rounded. He told me it was called clubbing and it was a symptom of lung disease.” Robert was immediately put on an oxygen nebulizer and a CT scan was ordered. Brenda reached for his trembling hand and gave it a soft squeeze.

When the doctor returned from reading the CT scan, he told Robert, “If you hadn't come here tonight, you would have drowned in your own blood. You'd have been dead by morning.” The doctors set to the task of removing the blood from Robert՚s lungs and he remained at the hospital for eight days following the procedure. However, his symptoms persisted, and he was in and out of the hospital for weeks until he was finally sent to the Cleveland Clinic for a lung biopsy. It was there that a team of lung specialists shared with Robert and Brenda the horrible news - Robert had IPF, a terminal disease in which interstitial lung tissue becomes thick and stiff, resulting in the inability to move oxygen to the brain and other parts of the body. Robert was expected to survive only another three to five years. As night descended and the hustle and bustle of the hospital turned to the quiet hum of darkness, Robert turned to God and prayed for the strength to live.

With Brenda as a patient guide, he learned to navigate a new lifestyle. For the first three months following his diagnosis, he needed to remain indoors. A large oxygen tank was placed in the living room. Tubing stretched from the tank to the kitchen and bathroom so that Robert could move about the house. His world became small and confined. Friends and family came to visit, but Robert was afraid of the germs they might bring and preferred the quiet company of Brenda and Rusty. “I didn't know how to help him,” Brenda says, “so I did what I do best. I cooked.” Brenda made him all his favorite dishes - chicken noodle soup, beef stew, pinto beans, and cornbread. Robert says the nourishment from Brenda՚s home cooking fortified his body and soul. 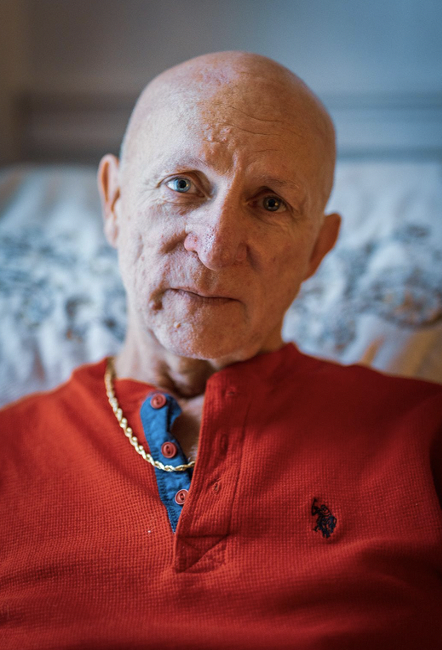 In time, Robert emerged from the confines of his home and took small steps toward resuming an active life. He obtained a mobile oxygen tank, which was clunky and burdensome, but a small cross to bear for the freedom it allowed him. Through the perforated sides of his plastic mask small wisps of fresh air seeped in - the rejuvenating scent of spring carried hopes for rebirth and new possibilities. Robert reveled in returning to the normalcy of shopping and socializing. Most importantly, he returned to church. “When I went back to church, people told me they never thought I was going to make it out of the hospital. But there I was. Alive. Another miracle.”

One day, Robert received unexpected news through his physician about a drug that had been developed for IPF. “It was a ray of hope,” Brenda says. “I didn't know if it was going to help him or not, but I prayed that it would.” The therapy consisted of taking two pills, one in the morning and one at night. However, the medication came with a $10,000 per month price tag. Much to Robert՚s astonishment, a representative from Orsini, a specialty pharmacy, helped coordinate a plan that would pay for Robert՚s care utilizing funds from a combination of non-profit and governmental organizations. By the grace of others, Robert would receive his treatment. “Have you ever heard of anything like that happening?” he says. Two-and-a-half years since he began treatment, Robert՚s heart is still filled with gratitude.

Robert՚s body responded well to the IPF medication. Within a month of taking the medication, the simple act of inhalation felt natural. It also allowed him to gradually stop taking steroids, albuterol, and other drugs. He eventually weaned off his oxygen tank. “Going out there into the world without a tank…now that was unbelievable.” Untethered, the world appeared anew. With a deeper appreciation for the gift of life, Robert rededicated himself to preaching his faith. “All of this that has happened to me has given me a chance to go out and tell my story,” Robert says passionately. “I've been a pastor at two churches and on staff at many others. Having IPF and receiving treatment has given me a chance to go out and give my testimony. And it's powerful. I'm blessed to share it with anyone who will listen.”

Recently, Robert՚s pulmonary function has noticeably improved. “This medication has changed my life,” Robert says, choking up. His improved health has allowed him to work, albeit in a limited capacity, through the Social Security Ticket to Work program for people with disabilities. As soon as the program gave him the green light to work, Robert called people he՚d known throughout his career, and he is now practicing paid carpentry again.

Even though Robert is in better health, Brenda still lovingly looks after him. On this blustery afternoon, Brenda pulls out a chicken from the fridge and rinses it down. As she peels a potato, she glances over her shoulder as Robert sits in his favorite chair with his bible on his lap. Robert closes his eyes, savoring a long deep breath that would have been unimaginable just a few years ago. “IPF is a progressive disease,” he says, “But I don՚t think about the future. This medication has given me the chance to live a longer, fuller life. I՚m alive today and I have nothing to complain about.”

Peering through the window, he reflects on the neighborhood that has held the two of them through so many trials and tribulations. Robert squints up toward the sky. Clouds form overhead with the promise of rain. It՚s time for Rusty to get some fresh air. He clips on Rusty՚s leash, quickly kisses Brenda and pulls a filtering mask over his mouth and nose. “It's a beautiful day,” Robert says. “Come on, buddy. Let՚s go!”

What is Idiopathic Pulmonary Fibrosis (IPF)?

Idiopathic Pulmonary Fibrosis (IPF) is a terminal disease in which lung tissue becomes thick and stiff or scarred over time, resulting in the inability to move oxygen to the brain and other parts of the body. Common symptoms include shortness of breath, a dry hacking cough, fatigue, unexplained weight loss, and muscle and joint aches. The condition is 'idiopathic' because the cause is unknown. Respiratory failure is the most common cause of death, which typically occurs within 3-5 years of diagnosis.