Sienna and Wesley's Journeys with SMA

“I want to make sure that everybody knows that there is hope. Don’t give up on your kids.”

From her little brown eyes, Sienna peered with curiosity at the team of nurses and doctors dressed from head-to-toe in hospital gowns. Shayn and Emily, her parents, remained light and playful, trying to make their baby girl laugh; anything to distract her from the sterile setting of the hospital room. A tube of medicine was removed from an unassuming plastic bag. Shayn and Emily gawked with amazement. Inside the tube was a single dose of a life-saving medicine that had the ability to forever change the course of their daughter’s life. The nurses carefully inserted a PICC line to infuse the medicine. Over the next hour, Sienna would receive a dose of a novel therapy for treating children with Spinal Muscular Atrophy type 1 (SMA1) - a historic moment for the promising possibilities of a new generation of medicine. The procedure was non-invasive and 17-month-old Sienna remained calm sitting in a chair, flanked by her parents. For Shayn and Emily, it was a day they will always remember: November 27, 2019. “After everything was done that day, we stood waiting for the elevator to go home,” remembers Emily. “Shayn turned to me and said, Nobody sitting here in this waiting room or even in the hospital knows that Sienna just received the most expensive, life-changing treatment for SMA1." 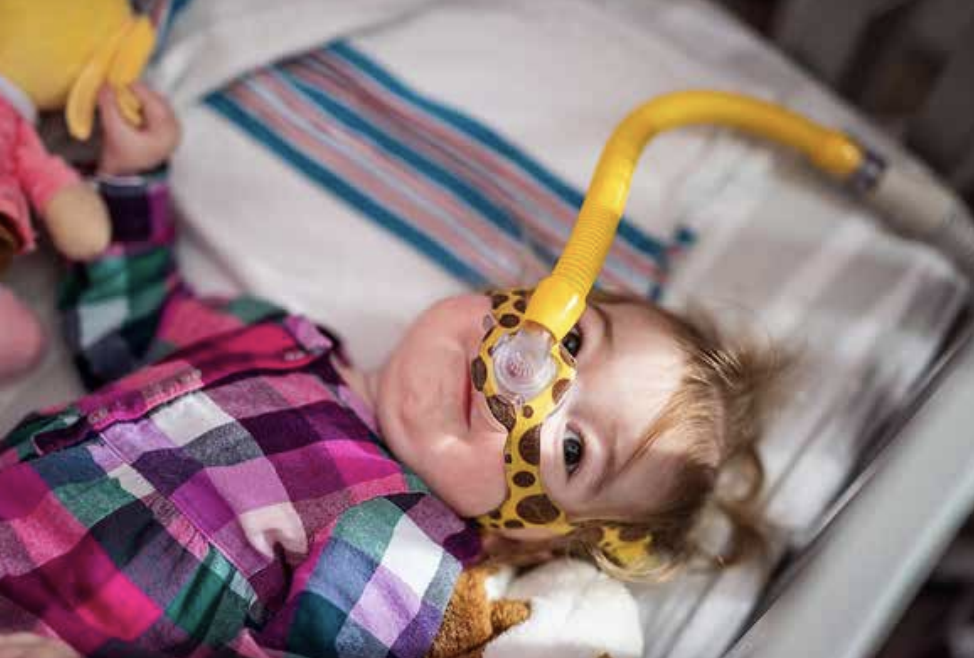 “It’s truly incredible”, says Emily, who has a background in applied science. “Just this little vial of something can dramatically change her life and others' lives... I just don’t know how to describe it.” They accessed the drug through Orsini, a specialty pharmacy focused on rare diseases and gene therapy. “Once we finally got Sienna approved, a representative from Orsini called and we shared in the excitement,” says Emily, who has always felt that Orsini treats her like “more than a patient name and number.” A battle ensued with their insurance provider, who were not eager to pay for the medicine, but fortunately Medicaid stepped up on their behalf to make the treatment possible.

SMA type 1 is a rare genetic condition caused by a mutation in the SMN1 gene which produces the survival motor neuron protein (SMN) that is vital to the function of the nerves that control our muscles. Without this protein, those nerve cells cannot properly function and eventually die, leading to debilitating muscle weakness. Without intervention Sienna would quickly lose mobility and eventually experience critical organ failure—most likely in her lungs. Even with major therapeutic improvements which have increased lifespans, the disease is generally considered fatal in childhood. Many parents of children born with SMA1 opt for palliative care, or in the case of prenatal testing, terminate their pregnancy. Sienna, in many ways, exists in stark contrast to all this. Still blissfully unaware, she is at the forefront of medical advancements—the culmination of decades of research—and a bastion of hope to other families affected by SMA1.

But today, she has new competition. Wesley lets out a wail to let everyone know he is awake. Across the living room, Sienna plays on the rug with her parents. Shayn rises to tend to their six-week-old infant and lifts his son into his arms— still as light as a teddy bear. Shayn peers into Wesley’s light-blue eyes and fills with wonder. “You have the hope of the world for your kids,” he says, reflecting on his family’s journey thus far. Wesley yelps again, and Shayn grabs the bottle, soothing Wesley, at least temporarily. 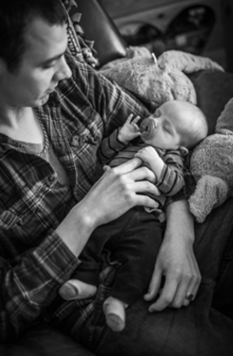 Shayn carries Wesley over to join his mom and sister on the rug. As Shayn lowers Wesley in, he squeals in excitement. Sienna sits up tall and stretches her neck to reach her baby brother and plant a soft kiss on his forehead. Sienna is in one of her sweet moods.

Emily explains, “I call her sassy Sienna... she either sparkles or she’s got sass— that is her, 100% of the time. She’s inquisitive and mindful of everything that’s going on around her.” Wesley is just beginning to show his personality. “He is almost a reincarnation of his father,” says Emily. “He has Shayn's looks... very boisterous. He's always making some sort of noise, unless he’s passed out.”

Following Sienna’s infusion, Shayn and Emily started their fight to get the same medicine for their newborn son after Wesley was diagnosed with SMA1 in utero. Knowing well the potential benefits of early intervention, the couple was motivated to have the medicine administered as close to birth as possible. “Seconds and minutes and hours make all of the difference,” says Shayn. Little Wesley would be one of the youngest children ever to undergo the therapy, greatly improving his chances of living a life unaffected by SMA1.

“With Sienna, we fought for two months to get her treatment. With Wesley, he was able to receive treatment at 10 days old. We were ecstatic.” Since then, each day in their household is filled with a sort of amazement even as things slowly return to normal—the result of an unlikely and turbulent last couple of years.

On the door to Sienna’s bedroom hangs a picture of her at two months old lying on Moose, the family’s eldest dog. “It was just turning fall,” remembers Shayn. Sienna’s first Halloween celebration was only a couple days away and Emily was hoping to carve pumpkins with her. “She was having difficulty breathing in the middle of the day,” says Emily, who then used a suction bulb to remove phlegm. “I suctioned her again, and her lips turned blue.” Suddenly, Emily realized that Sienna was not breathing at all. Instincts took over and the family rushed to the ER, where they would stay for the next four-and-a-half weeks. 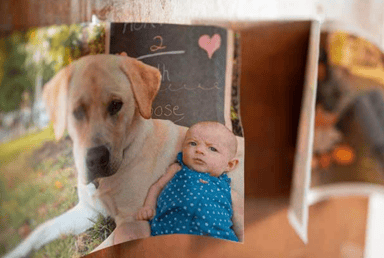 Doctors could find no infection or contagion. Specialists began running blood tests for a number of conditions including SMA and muscular dystrophies. Two weeks after bringing Sienna to the hospital, the blood tests returned positive for SMA1. “After the doctor told us, we googled it,” says Shayn “That destroyed me for a long time. It’s like someone telling you: You know the thing you love the most in the world? Enjoy it now, because you’re going to lose it soon.” Shayn and Emily read that the life expectancy for children with Sienna’s diagnosis was only 18 months. Hopelessness took hold. “That was a lot to throw at two young parents,” says Shayn. “We had no idea about anything... There was nothing about treatments or other options.”

Fortunately, their neurologist took the time to educate them about emerging SMA1 therapies, renewing hope and proposing a future for their baby girl. Likewise, the online SMA community swooped in to support the young parents, offering advice and exemplifying other children, like Sienna, who were living longer into childhood thanks to supportive treatment. Emily and Shayn made the commitment then and there to fight.

The only medicine available to treat SMA1 at the time used small-molecule technology to activate copies of the SMN2 gene to supplicate the missing SMN1 protein, slowing down the progression of the disease. Although not a total fix, the therapy can greatly ameliorate the prognosis. Shayn and Emily succeeded in getting access to the treatment and Sienna received her first two doses while still in the hospital.

With a treatment and supportive community, Shayn, Emily, and Sienna prepared to return home for the first time in over a month. They had to purchase specialty medical equipment and upgrade their electrical circuits to accommodate—life had forever changed. They would return to the hospital for monitoring for the next several months, but Sienna was breathing well and gaining strength. As the panic of the SMA1 diagnosis began to wear off, Shayn and Emily decided to give Sienna a sibling, knowing well that there was a 25% chance that their new child would be born with the same disease.

Their fearless endeavor paid off and with this therapy, “Wesley should have almost all of the normal physical strength and abilities we have,” says Emily. Wesley received his infusion before the onset of any SMA1 symptoms, meaning his motor neuron cells have the potential to function normally. On the horizon, Emily sees her family becoming one of variable abilities and attitudes toward the disease, filled with unknowns, but with the promise of a future. “We’re going to have a hard time saying that they have the same condition,” she ruminates. “But because her [SMA] was caught late and his was caught early—that’s how we’ll be differentiating, in physical aspects. Hopefully for them, it won’t matter. They both will have their own personalities and will enjoy life the way they can live it, each to their own.” 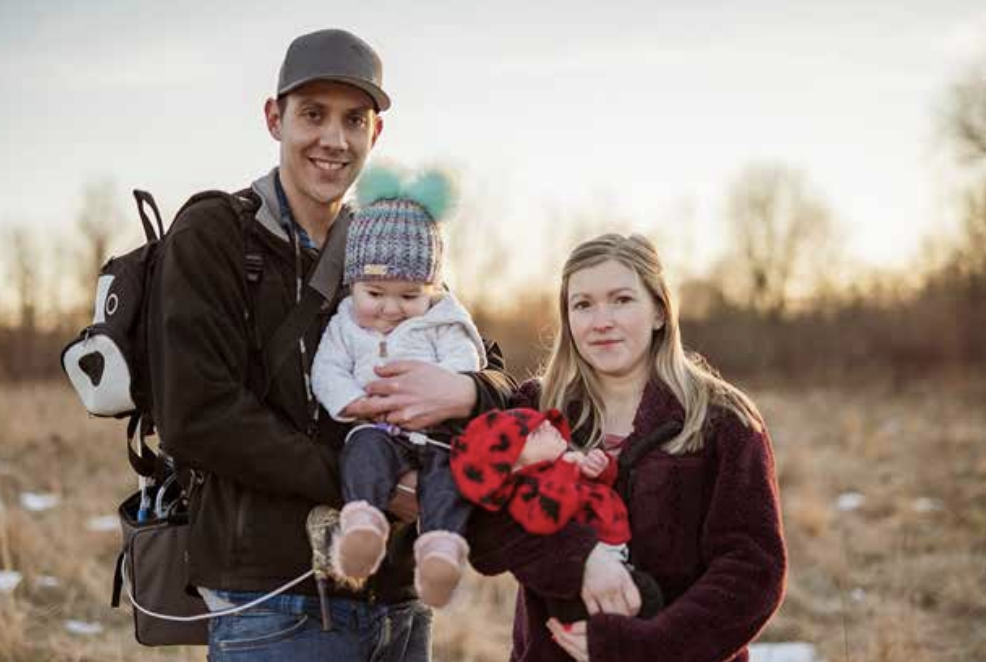 After facing the unfathomable odds that have brought the family to where they are today, the desire now is for life’s simple joys—those most afforded by being together. “One of the best things I could ever hear is the sound of her in the other room giggling,” says Emily.

Even her temper-tantrums are gifts—an emblem of life moving forward, not regressing. “It’s given us a different outlook on life—the physicality of life shouldn’t matter as much as the emotional and mental enjoyment of life.”

After playtime, it’s time to put the kids down for a nap. True to character, Wesley promptly passes out in his suspended crib, while Emily carries Sienna into her bedroom and lays her down gently. In between cuddling with stuffed animals and other toys, Emily places Sienna’s giraffe-themed mask over her nose and around her head before connecting it to her BiPAP machine, an important device for respiratory support while she sleeps. Then, she gently connects a pulse oximeter to Sienna’s tiny foot to monitor her O2 saturation and pulse. Sienna’s smile shows from under the colorful mask on her face and soon her eyelids flutter shut.

Sienna and Wesley both drift off to sleep in their crib and chair respectively and the noise of the afternoon gives way to a placid calm. “Before I never thought much about medicine,” reflects Shayn. “And now, I owe our life—our children’s lives—to medicine. I don’t know if my daughter would be here without it. I know that we wouldn’t have ever had my son.” Shayn and Emily are committed to advocating for the lives of SMA-affected children, knowing now that treatment is an option. “I want to make sure that everybody knows that there is hope,” he continues. “Don’t give up on your kids.” He and Emily are devoted to spreading positivity among the SMA1 community, returning the indispensable advice that they received not long ago.

By telling their story, they hope to inspire other newly-diagnosed parents to be assertive in the pursuit of treatment, and to believe that their kids can and will survive.

For Sienna and Wesley, the goal is just to live, and to grow into whoever they choose to become. Emily knows things will always be a little different, something she accepts openly. She knows Sienna might not possess full physical prowess but is certain she will change minds. “Maybe she won’t be able to run a marathon or climb a mountain, but she’ll be able to do other things that will impact the world.” At this point it’s safe to say that Sienna and her baby brother already have. 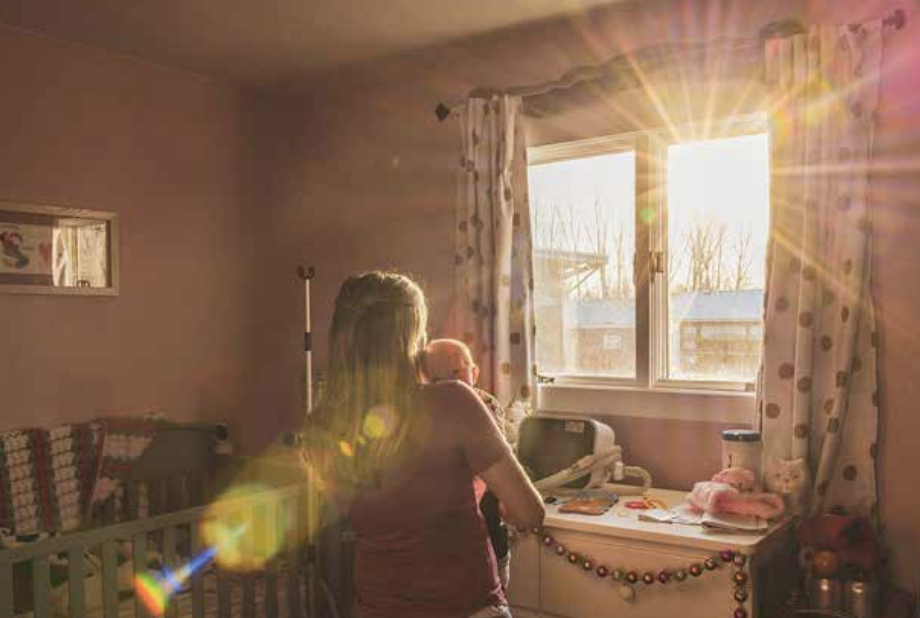 What is Spinal muscular atrophy (SMA)?

Spinal muscular atrophy (SMA) is a rare, genetic and progressive neuromuscular disorder characterized by weakness of the skeletal and respiratory muscles. SMA is caused by a missing gene that encodes the survival motor neuron (SMN) protein. The SMN protein is critical to the health and survival of the nerve cells in the spinal cord responsible for muscle contraction (motor neurons).

Approximately 10,000 people in the United States have SMA, which occurs in nearly 1 in 11,000 infants and is the number one genetic cause of infant death. The disease can affect any race, age or gender.