Joan introduces her “I-Love-Me Wall” at the entrance to her living room. From floor to ceiling, shelves display her artwork and photographs; the majority are of her feline companions over the years. “That's Dillard,” she points to a picture of the cat spread out across the floor. “I call this one, 'A Prayer to St. Francis for all the kitties without homes.' And that's Dabney,” she adds. The pictures are meticulously placed at even intervals on the shelves, well-dusted and well-maintained. “All these photos I just took, no filters or nothing, aside from the sepia, and I cropped them. I have a knack for it.”

The “I-Love-Me Wall” was an invention 20-some-odd years ago with a roommate who was going through a tough time, but it has taken on new meaning in Joan's new home—a modest double-wide mobile home on the outskirts of St. Petersburg, Florida. The trailer was originally her father's, but after he passed away three years ago, Joan became the sole owner. “I put new flooring in, sub-floors,” she says, pointing out each new household accoutrement. “I had the countertops done and had it painted outside.” Her father's picture sits on a side-table with an urn containing his ashes, but everything else is Joan՚s space, dedicated to her passions and her kitties. “When I moved in, I felt like I lived in a shanty. Now, I've got to make it mine.” After decades of neglect, sadness, abuse, and loneliness, Joan is in the process of remodeling her home and herself.

For Joan, this also means taking steps to restore her outward appearance. She is planning on getting surgery to correct her jawline which became misshapen as an indirect result of living with tardive dyskinesia (TD). “I have tardive dyskinesia and had no medication to control it for 15 years,” she says. The condition causes repetitive, involuntary tics and arises in individuals who have taken antipsychotic neuroleptic medications, like Joan did for over 30 years. The longer one takes these medications, the higher the risk becomes to develop the disorder which is theorized to be caused by alterations to the dopamine neurotransmitter. For Joan, the condition manifested as an involuntary chewing motion, which damaged the inside of her mouth. “I couldn't control it,” she says. “I chewed such a big hunk of my gum that they had to remove it... It was precancerous. I had to get oral surgery.” The surgery left a noticeable mark on Joan՚s face—something she has struggled with—and thus, the cosmetic surgery is a gift to herself.

Joan's external beautification is a mere hint at the mental and emotional work she has undertaken in recent years. “This is the first time in my life that I have total control,” says Joan positively. “If I screw up, it's nobody's fault but mine. If I succeed, it's nobody's fault but mine.” Joan is aiming to get her life back after years of living in a fog created by psychiatric medications. Tardive dyskinesia has in many ways just been an addendum, an extra layer, to the difficulties that Joan has suffered through in her life, but starting to treat it has opened the doors to improving it on all fronts.

She՚s being torn between reality and the demons in her head.

Thinks she could figure it out, if she could only get out of bed.

But the psych medications she՚s taking are so tried and true.

Barely able to lift her head, she realizes that՚s all she can do.

Has it been years or merely days, since the pills took life away?

Clarity wins over confusion, but it is a very, very short stay. 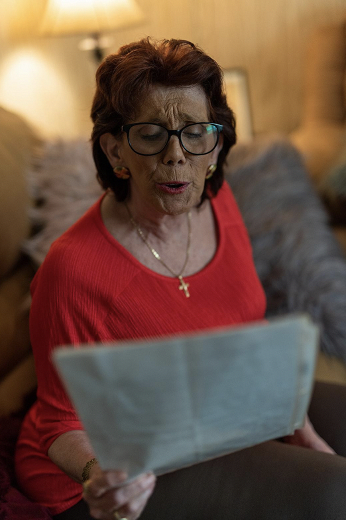 “I started writing rhyming couplets; that was what really saved me,” says Joan. From her study, a sunlit room at the front end of her trailer, she pulls out binder after binder filled with laminated pages of verse. “I have been working on novels too,” she adds. The volumes of poetry and prose that Joan has produced started as a coping mechanism, a therapeutic release, and grew into an artistic passion. “I like horror and macabre, but a lot of it is based on things that happened in my life,” she says. In hopes of being published, Joan joined local writers' associations to share her true tales inspired by a life that has seen some intense highs and lows.

“I have been treated for bipolar disorder for a very long time,” says Joan. “The only problem is I don't have bipolar disorder.” Joan entered the mental health system as a young adult and is only now beginning to recover. “Once you're labelled in the mental health system, you lose all credibility,” she says. Instead of receiving therapy to help her cope with real difficulties in her life, doctors began prescribing Joan powerful antipsychotic medications after she turned 30. The medications took over her life, exacerbating pre-existing health challenges and burying her in a haze, full of vicious side effects, memory loss, solitude, and desperation.

Joan does suffer from post-traumatic stress disorder (PTSD) related to difficulties she experienced as a young person. “I didn't need mood-stabilizers,” she says. “I needed someone to listen to me, to be heard.” She was born in New England and moved to Florida as a child. When her parents divorced, Joan and her mother moved to the city of Bradenton, where she spent much of her life. Her mother remarried a man who sexually abused Joan throughout her childhood—the trauma at the root of her lifelong battle with mental health.

With virtually no support from family, Joan learned how to survive alone, living on and off the streets as a teenager. Still, she was resourceful, and landed high-paying jobs, bought a home, drove sports cars, and hung out with the “in-crowd.” “I was really good at darts,” she says. In her 20s she joined an all-female team, which at one point placed second in the state tournament. On the surface she seemed successful, happy even, but not far below lay an injured human who needed help.

Her health problems began to multiply. She battled cancer at 25 and was diagnosed with hepatitis. She had a few brushes with the law—drug-related—which would cost her jobs. Criminal charges also prompted her mental health treatment and would influence the way she was viewed by doctors for the coming decades. They diagnosed her with bipolar disorder and started her on anti-psychotic medication.

“The doctors fed me so many psychotropic medications at the same time—Seroquel, Abilify, Wellbutrin, Klonopin, lithium—the list is endless.” The medications did not interact well. Joan began to suffer from disorientation, sleeplessness, sleep-walking, and memory loss. She put on excess weight. Soon, she was taking pills to help her sleep, eat, and wake up every day. 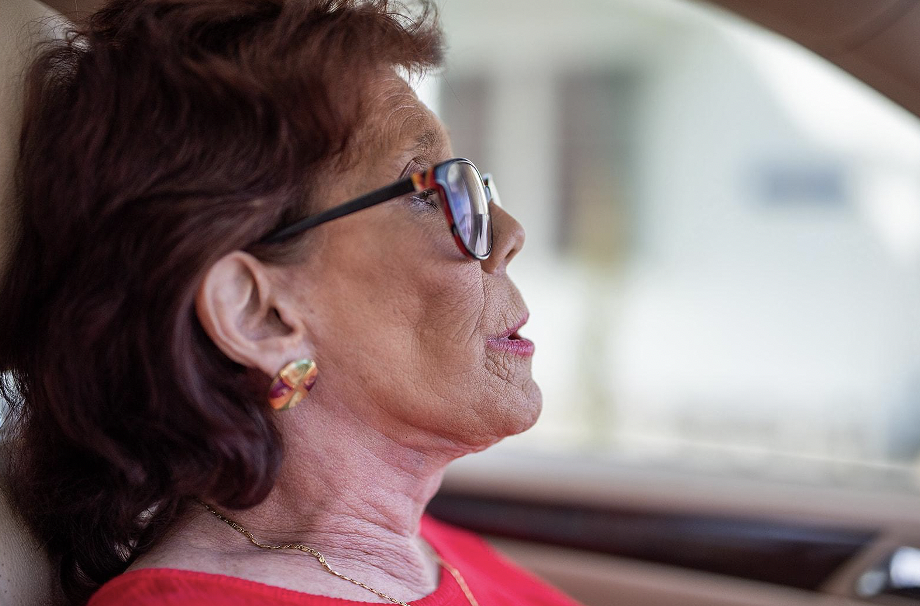 Furthermore, her personality, her talents, and her passions all disappeared behind the cloak of medicinal fog. She gave up darts; she moved in with her mother and isolated herself from friends. “I thought I was a burden and had nothing to offer the world,” she says. Joan tried to take her own life multiple times but was always thwarted. Despite her severe depression, lack of resources, and the amount of chemicals running through her blood, Joan began to have moments of clarity and built resolve to change for the better. “I realized that the doctors were running my life and I wasn't getting anywhere,” she says. “Instead of being more successful, I was becoming less successful. I was having more physical problems.” The chewing symptoms related to tardive dyskinesia started when Joan was in her 40s and only increased with time. It was a terrible addition to her predicament, but also one that spurred action.

Controlling the symptoms of tardive dyskinesia has coincided with and complemented Joan՚s mission to turn her life around. Joan started a specialty medication for tardive dyskinesia less than a year ago, and the results have been notable. “I've stopped chewing,” she states. “Before I was on the medicine, I chewed and chewed and chewed and I couldn't eat. I lost 26 pounds. I was miserable.” The drug was developed specifically to target the symptoms of tardive dyskinesia and so far the side effects have been minimal. Joan received a big boost when her specialty pharmacy, Orsini, helped her get a grant from the HealthWell Foundation to pay for the medication. “The woman at Orsini told me: 'I got you a grant for $10,000.' I cried.” Joan has not worked since she was 45, and lives off of disability income, less than $800 a month, so getting the funding was hugely important. It has allowed Joan to start over and make a new home for herself.

Joan is abundantly talkative, telling stories and reminiscing about her life at a nonstop cadence. However, her final hurdle seems to be rebuilding trust in other people, something she understandably lacks. “I need to start going to events here,” she says. The mobile-home park hosts weekly events, such as bingo, potluck meals, and movie nights. After Joan՚s upcoming cosmetic surgery, she is poised to try and re-enter the fray by attending them.

A self-reliant survivor, Joan continues to find her deepest pleasures in writing, photography, and taking care of her cats. “I do have talent,” she proclaims. The lessons of Joan՚s life are not to be taken lightly, and she hopes that her story can help others like her. She is a woman who wants to be heard and loved the way she deserves. For now, it seems that is best provided by Dillard, her longtime furry companion. “Animals are better than people,” says Joan, a tinge of humor in her voice. Hiding away in her bedroom, Dillard wakes up from one of his many midday naps and stretches. Joan rubs his head and he curls his neck to nuzzle her hand, purring softly.

What is Tardive Dyskinesia?

Tardive dyskinesia (TD) is a neurological movement disorder typically characterized by repetitive involuntary movements of the jaw, lips and tongue, and some individuals experience involuntary rapid jerking movements or slow, writhing movements in the arms and legs. The condition is a result of long-term use of certain types of neuroleptics, such as antipsychotics or major tranquilizers.