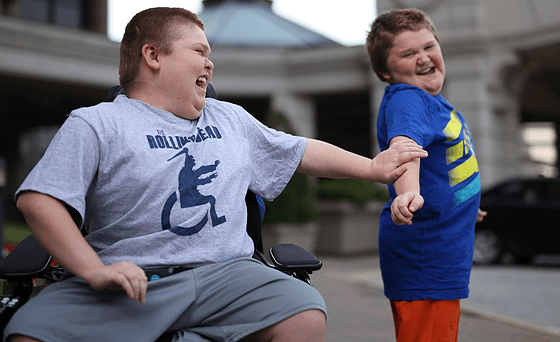 Austin and Max's Journeys with DMD

"I miss hiking all day ... I miss being able to go hunting. I have an all-terrain wheelchair, but that's not the same as walking."

Austin has been in a wheelchair for five years now. At the age of 10, he lost the ability to walk, and at 16, misses spending more times in the woods where he grew up.

Austin lives with a mutation of Duchenne Muscular Dystrophy, or DMD, a condition that slowly takes away motor abilities and leads to premature death in boys. It is a condition with few treatment options and no cure. But don't be fooled by the life-threatening prognosis - Austin isn't scared.

"I'm not afraid of dying," says Austin audaciously. "There is just a lot of things I want to do before it's my time ... I think we should be giving people a good life, regardless of how long they're going to live."  And this isn't just talk. Austin is a DMD advocate. He has traveled extensively to a slew of industry and congressional hearings, fighting for more patient access to treatments not yet approved by the FDA. Along with his mother Jenn, and his younger brother Max, who also has Duchenne, the family has become a keystone in the movement for better treatment access and recognition that DMD is a disease deserving of more attention and more options.

Their drive to improve the lives of other boys with DMD has been inspired in a large way by the improvements evident from new treatments. Both Austin and Mac are recipients of a new exon-skipping medication that is currently in the process of being reviewed by the FDA for approval.

This approach allows truncated versions of the protein dystrophin to be created, helping to starve off the rapid loss of muscle mass that boys with DMD face. Max at 13 is still walking, much thanks to the drug, which he's been taking for the last 4 years. Austin was only able to start the drug less than a year ago, but he is noticing changes too. "I notice that I'm able to do stuff that before I wasn't able to. I'm able to move better. I can dress myself now."

Despite his apparent limitations, Austin is physically active in some surprising ways. "I met my friend Jake at an adaptive-ski program ... I play power-soccer and I would like to do other sports. I want to start power-hockey too." Each of these sports requires special types of wheelchairs and equipment., which can be very expensive, but Austin is working on that too. "I'm starting a company to sell discounted wheelchairs for adaptive sports," he says, smiling. His company hopes to supply and subsidize the cost of the specialty wheelchairs to people who can't afford the,.

With such ingenuity, it is no surprise that Austin is making big plans. Like most 16-year-olds, he wants nothing more than to be autonomous as he matures into the early stages of adulthood. "He sees himself living independently," says Jenn. "Right now he's applying for jobs - entirely on his own." Many of his friends have jobs and girlfriends, things that teens with DMD rarely obtain, but Austin does not feel excluded. "Sure I'm physically different, but I can still do the same things, just in a different way." He also is working hard to get into college. "He wants to go to a good school," says Jenn, remarking how dedicated both her boys are to getting an education. "Their teachers tell me they're some of the hardest working kids in the class."

Along with two other unaffected siblings, Austin and Max are part of a family that refuses to let DMD get the better of them, or anyone else. "I really believe this is the last generation to be affected in this way," says Jenn, showing an optimism that has surfaced after years of struggle to get her boys treatment. Likewise, Austin remains firmly altruistic. "Sometimes I just get mad that other kids can't have the treatment that I have," he says. And he is determined to help make that a reality, a testament to his strength and dedication to create change.

What is Duchenne Muscular Dystrophy?

Duchenne muscular dystrophy (DMD) is a genetic disorder characterized by progressive muscle degeneration and weakness. It is one of nine types of muscular dystrophy. DMD is caused by an absence of dystrophin, a protein that helps keep muscle cells intact. Symptom onset is in early childhood, usually between ages 3 and 5. The disease primarily affects boys, but in rare cases it can affect girls.