“I think it’s really important to go out and advocate for people with MPS because so many families that are impacted can’t be there to represent themselves.”

The sun has barely risen when Nicholas drives past the tree-lined campus of Michigan State University to the gym where, barring Sundays, he begins each day with a personal challenge. It's his last workout before spring break, and afterwards he will drive to his parents' house, an hour-and-a-half away, to spend a few weeks with them and his brother, Christopher. Nicholas opens his workout regimen on his phone and sets out to conquer it - three sets of deadlifts, chest presses, lateral pulldowns, squats, low rows, dumbbell curls. “Working out at this level of intensity is new to me,” he says touching the scar on his chest where for ten years a medical port had been implanted. Nicholas recently had the port removed from his chest which increased his overall mobility, enabling him to pursue physical challenges like weightlifting.

Nicholas lives with mucopolysaccharidosis type II (MPS II), a rare, degenerative disease. Like so many others who live with the genetic illness, maintaining strength and mobility is key, but unlike most, Nicholas' muscle and skeletal degeneration has been mild. MPS II, also known as Hunter syndrome, is a lysosomal storage disorder wherein large sugar molecules build up in body tissues. The syndrome arises from a deficiency of the lysosomal enzyme iduronate-2-sulfatase and causes abnormalities in multiple organs including the heart, skeletal, and respiratory systems. Most people living with the syndrome are often physically and cognitively impaired to the point where Nicholas' everyday life-living independently in a college dorm, driving, and working out at a gym - would be difficult if not impossible. “I do not take my fortunate predicament for granted,” he says. “In fact, it is humbling to live with MPS II as such an able-bodied person.” The syndrome ranges from attenuated to severe. Both Nicholas and his younger brother, Christopher, live with an attenuated form of MPS II, which tends to be slower progressing than the majority of MPS II cases. Nicholas describes their version of MPS II as “a very rare form of a very rare disease.” 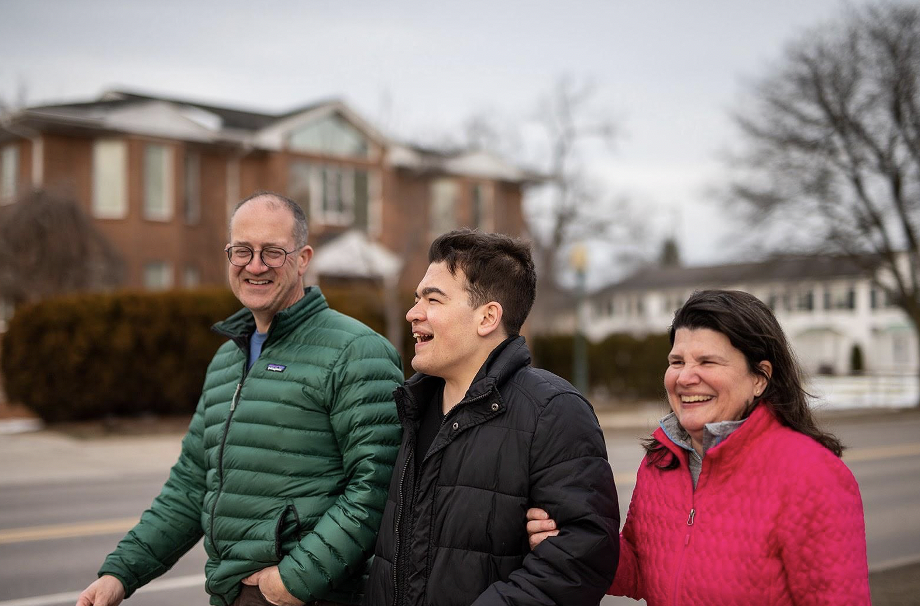 When Nicholas was a baby, his parents, Julie and Bob, noticed he had trouble learning to crawl, but they chalked it up to the fact other babies they knew seemed to be developing at different rates. He also was plagued with constant ear infections and other mild illnesses, but they believed the symptoms were unrelated. In first grade, however, a gym teacher raised a red-flag about Nicholas՚ physical capabilities when she noticed that he couldn't do sit-ups and push-ups as well as other kids. “It was a surprise to hear that,” says his mom, Julie, “because he seemed so active.“ She laughs in retrospect. “Within the neighborhood, Nicholas was such a commander of other kids that we didn't notice that he wasn't moving around much. But when we looked closely one day, he was just standing there pointing and giving other kids instructions on how to play baseball. He wasn't actually playing.”

As kids, Nicholas and Christopher shared everything - toys, games, doctors, and friends. What they didn't know, until they were ten and eight respectively, was that they also shared a genetic diagnosis. Nicholas' symptoms presented before Christopher's, causing him discomfort and at times, severe pain. As parents, Julie and Bob became frustrated as one medical problem piled up on top of another - ear infections, breathing difficulties, enlarged liver and spleen, and intense headaches. When Nicholas was six and Christopher was four, they switched to pediatricians who immediately noticed their skeletal issues (broad chest bones, incomplete shoulder structure) as well as their broad foreheads, wide noses, thick lips, and slanted eyes. At the age of nine, Nicholas' headaches came daily, and the pain was severe. Day after day, his parents watched him curl up with his head pressed against the couch cushions to create darkness and drown out sound.

Nicholas got an MRI which revealed spinal stenosis, a narrowing of the spinal column. A surgeon performed a brainstem laminectomy in order to relieve pressure on the spinal cord. When Nicholas emerged from surgery, Julie and Bob caressed their little boy's arm and brushed his hair against his forehead. Their hearts ached, wondering what was behind all of his medical issues. “The surgery relieved the headache problem,” explains Nicholas. “But the confusing piece was not that many people need a laminectomy at nine years old. It typically occurs in adults.”

With Nicholas at home recovering, Julie and Bob channeled their feelings of desperation into action - they were determined to find answers about Nicholas' series of seemingly unrelated medical issues. When Christopher started to display similar symptoms, their suspicions grew. Perhaps there was an underlying genetic component. The family went to see geneticists at Children's Hospital of Michigan in Detroit who had difficulty relating Nicholas and Christopher's symptoms to MPS II at first. “One major source of confusion was that MPS II generally comes with neurocognitive decline, and the way the boys played together and did puzzles and read books - the doctors saw them as high functioning and bright. They hadn't thought to test for MPS II,” says Julie.

At the time, there was an older geneticist at Children's that had a fondness for the two rambunctious brothers. Although she was at the age of retirement, she stuck around long enough to see their diagnosis through. Through a series of trials and errors over the course of two years, she tested for MPS II. After so much unknown, the diagnosis actually came as a relief. Bob explains, “We finally had a name for the mystery.”

As Julie and Bob adjusted to the news, they had many questions - the most important ones centered around treatment. Enzyme replacement therapy (ERT) was recommended as the most promising option. The treatment involves infusing Nicholas' and Christopher's blood with the enzyme their bodies lack to help them maintain physical strength and slow the progression of the disease. In order to effectively administer the therapy, ports were surgically inserted in their chests. Each week, Nicholas and Christopher went to the hospital where a nurse stuck a long needle through their ports, pushing the enzyme through internal tubing that circled around their necks, delivering it directly into their hearts. Adjusting to life with the port was a challenge for Nicholas and Christopher - its location impeded the flexibility of their torsos, but the enzyme itself was preserving their overall strength and mobility. It was a trade-off that was well worth it. However, the timing was challenging. Nicholas had just begun middle school, and while his peers joined sports teams and participated in weekend outings, he left school every Friday for the hours-long infusion at Children's Hospital, leaving him exhausted and drowsy for the remainder of the day and through Saturday. “It wasn't ideal,” Nicholas says. “I didn't like all the needles and procedures. As a kid, it felt frightening.” 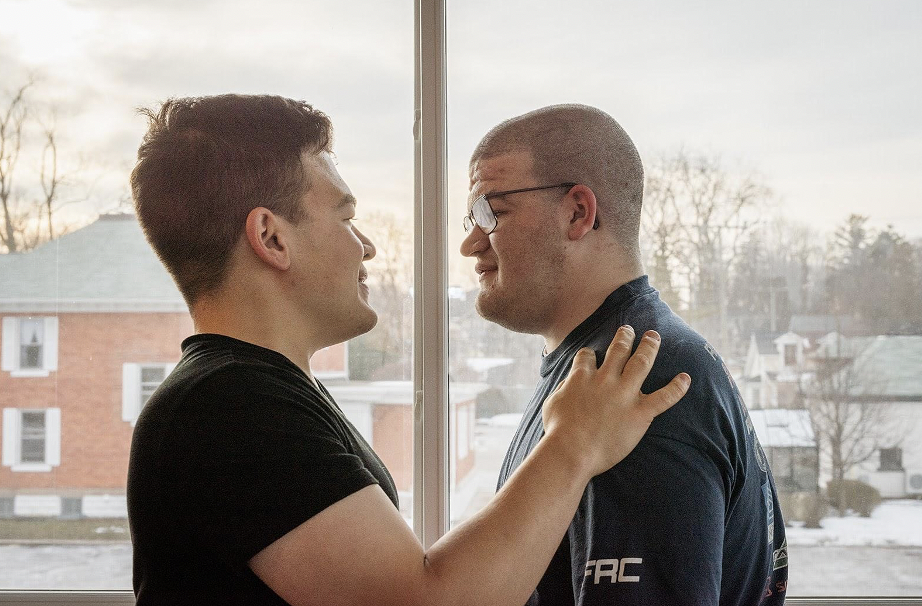 Then came a breath of fresh air. Nicholas and Christopher were connected to Orsini, a specialty pharmacy, that coordinated and customized their care so that they could receive their infusions at home. “From the beginning, working with Orsini was wonderful,” Julie says. “The company is caring and family-oriented. They have always answered our questions and been welcoming. Saving all that time driving and waiting was a gift.” These days, Nicholas continues to receive infusions and support from Orsini, who have been flexible in accommodating his move to college. When he's at college, he receives ERT at a nearby medical center only five minutes from his dorm. When he's home, he receives it there along with Christopher, who lives at home year-round.

With the move to college and living on his own, Nicholas jumped full speed ahead into defining himself as an adult and is naturally drawn to leadership roles. At college, he is a CoRe (Cornerstone Residential Experience) organizer who manages a staff of 30 to 35 students who are peer leaders for first year students at Michigan State, and he curates the educational enrichment experiences of 1600 - 1800 freshman engineering students by organizing events. “I genuinely enjoy helping others,” he says, “Perhaps because of all that I have gone through.”

With his growing passion for community engagement, he signed up for his first MPS Society conference in December 2019. What he witnessed was at first overwhelming but expanded into a moving and inspirational experience. At the conference, Nicholas met people who were not independently mobile. He met people who could not speak. And yet, he shared an undeniable bond with them. “Out of respect for others who are more affected with MPS II, I don՚t draw attention to our differences. We all struggle and are in this together.” He was moved by how welcomed he was and immediately saw an opportunity where he could make a difference - serving as an advocate for others. In the past few months, he has lobbied twice on behalf of the MPS community at the national level on Capitol Hill. “I think it's really important to go out and advocate for MPS because so many families that are impacted can't be there to represent themselves.” Of particular importance to Nicholas is advocating for newborn screenings because of the benefits early intervention might provide to babies and toddlers. “Most kids aren't diagnosed until they are between two and four,” he explains. “Imagine what could be done if they knew the diagnosis earlier. Maybe those kids could live fuller lives.”

Nicholas looks at his watch and without being asked, he begins thawing some fish and chops some potatoes in preparation for dinner. His parents beam at his confidence and skill. For 20 years, they have had the privilege of watching their once-rambunctious boy overcome numerous medical challenges and develop into a thriving, diligent, and competent young man. They couldn't be prouder of his leadership roles, his dedication to his schoolwork, and his recent advocacy work on behalf of others living with MPS. In this coming-of-age story, Nicholas is walking through the door from childhood to adulthood with grace. 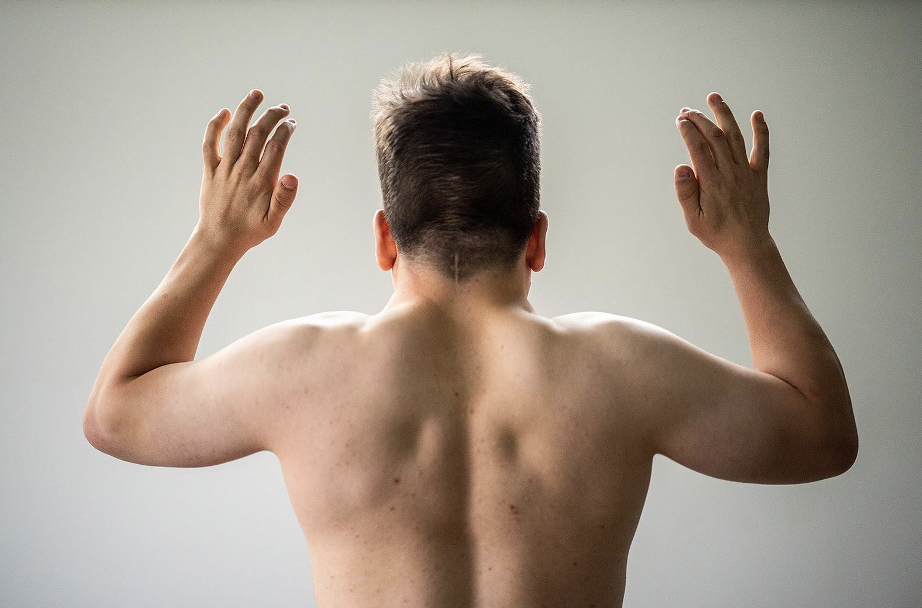 Mucopolysaccharidosis (MPS) is an inherited metabolic disease in which the body either does not produce enough enzymes required to break down sugars into simpler molecules, or the body produces enzymes that do not work properly. Over time, molecules called glycosaminoglycans (sugar carbohydrates in each of our cells that help build bone, cartilage, tendons, corneas, skin, and connective tissue) collect in the cells, blood, and connective tissues, resulting in permanent, progressive cellular damage. The cellular damage affects the appearance, physical abilities, organ and system functioning, as well as cognitive development.

There are nine subdivisions of MPS that have been identified: